Home
BACK
Rich spends most of his days fixing fence, moving cattle, and adding to his tally of wild pigs that he shoots on the Texas property where he works as a ranch hand.

“My job title is ranch hand slash hunting guide,” says Rich. “I love to hunt, and I’d like to say that’s what I do. But mostly I spend my time on the less glamorous parts of the ranch life. But we book hunters for deer, exotic game species, and hogs, and that’s where the guiding comes in. I take hunters out and guide them to the mature animals they’re looking for.”

But the Hill Country ranch is home to hundreds of wild hogs, which represent both a blessing and a curse. The curse is that they wreck fences, root pastures, and run the native wildlife off the best forage. The blessing is that they are huntable year-round, and Rich has earned a reputation as one of the area’s best hog hunters.

“A lot of people run feeders, and just hunt around the feed, but that’s not the way I hunt hogs. I encounter them across the ranch, and hunt them on their own terms, by spotting, stalking, and outsmarting them.”

That sort of hunting style puts a premium on a lightweight, nimble, and dependable rifle, and Rich was one of the first to put the Traveling Savage through its paces in the field. “The rifle was new to me, but it’s one that I’d use every day,” says Rich. “It’s tough. It’s light, and the recoil is very manageable. But the AccuFit system is something that I really see the benefits of as a hunting guide. I could have a single rifle that could be adjusted to fit a kid from Alaska or a full-grown man from Alabama. We have a lot of hunters who get here without a gun, either because the airlines lost it or because they don’t want to travel with one. I could see having a Savage in my safe that I could loan out to a wide range of hunters.”

Rich says the .280AI chambering of the Traveling Savage was another happy surprise.

“I had never used that caliber on pigs, and I thought it might be either underkill or overkill, but it was perfect,” he says. “Pigs are tricky, because if you hit them just a little back, they don’t bleed. The fat closes off the exit wound. But I found my pig 10 yards from where it was hit with the .280. And it was stone dead.”

Rich talked while taking a break from the blistering Hill Country sun, but he was eager to head back to the ranch.

“Some people make New Year’s Resolutions about losing weight or saving money. My resolution this year was to kill 50 pigs. The one I killed with the Traveling Savage was number 39. If you’ll excuse me, I have some more work to do.” 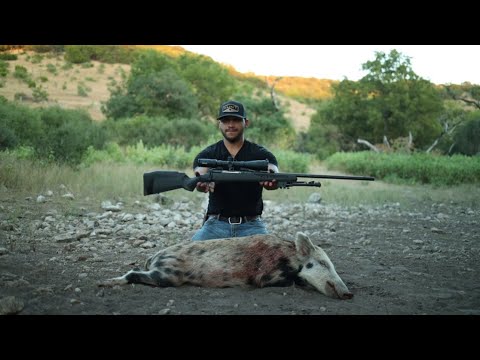